Kumbh Mela – Discover India and Yourself

You are here: Home > Blog > Kumbh Mela – Discover India and Yourself 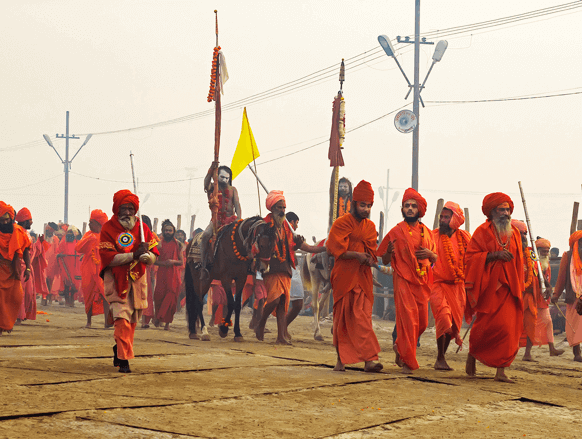 The Kumbh Mela (the festival of the sacred pitcher) is anchored in Hindu mythology. It is the largest public gathering and collective act of faith, anywhere in the world. The Mela draws tens of millions of pilgrims over the course of approximately 48 days to bathe at the sacred confluence of the Ganga, the Yamuna, and the mystical Sarasvati. Primarily, this congregation includes Ascetics, Saints, Sadhus, Sadhvis, Kalpvasis, and Pilgrims from all walks of life. Pilgrims to the Kumbh Mela come from all sections of the religion ranging from Sadhus (saints) and Naga Sadhus who practice ‘sadhana’ and keenly follow a strict path of spiritual discipline, to Hermits who leave their seclusion and come to visit the civilization only during the Kumbh Mela, to seekers of spirituality, and to common people practicing Hinduism.

Kumbh Mela, in Hinduism, is a religious pilgrimage that is celebrated four times over a course of 12 years. The geographical location of Kumbh Mela spans over four locations in India and the Mela site keeps rotating between one of the four pilgrimages on four sacred rivers as listed below:

Each site’s celebration is based on a distinct set of astrological positions of the Sun, the Moon, and the Jupiter. The celebrations occur at the exact moment when these positions are fully occupied, as it is considered to be the holiest time in Hinduism. The Kumbh Mela is an event that intrinsically encapsulates the science of astronomy, astrology, spirituality, ritualistic traditions, and socio-cultural customs and practices, making it extremely rich in knowledge.

During the Kumbh Mela, a number of ceremonies take place; the traditional procession of Akharas called ‘Peshwai’ on elephant backs, horses and chariots, the shining swords and rituals of Naga Sadhus during ‘Shahi Snaan’, and many other cultural activities that attract millions of pilgrims to attend the Kumbh Mela.

The origin of Kumbh Mela was transcribed by the 8th-century philosopher Shankara. The founding myth of the Kumbh Mela points out to the Puranas (compilation of ancient legends). It recounts how Gods and demons fought over the sacred pitcher (Kumbh) of Amrit (nectar of immortality) called the Ratna of Samudra Manthan. It is widely believed that Lord Vishnu (disguised as the enchantress ‘Mohini’) whisked the Kumbh out of the grasp of the covetous demons who had tried to claim it. As he took it heavenwards, a few drops of the precious nectar fell on the four sacred site we know as Haridwar, Ujjain, Nashik and Prayag. The flight and the following pursuit is said to have lasted twelve divine days which is equivalent to twelve human years and therefore, the Mela is celebrated every twelve years, staggered at each of the four sacred sites in this cycle. The corresponding rivers are believed to have turned into Amrit at the cosmic moment, giving pilgrims the chance to bathe in the essence of purity, auspiciousness, and immortality.

Kumbh is one of the most sacred pilgrimage sites for Hindus. It became a matter of research amongst scholars when the legend of Kumbh began attracting millions of pilgrims from across the world. However, it is an established fact that Prayag has been the center stage of Kumbh and an event of such grand scale does not culminate in one day but gradually develops over a period of time.

The term ‘Kumbh’ comes from the root ‘kumbhak’ (the sacred pitcher of elixir of immortality). There is a mention of ‘Kumbh’ and the bathing ritual associated with it in the Rig Veda (verse 10.89.7). It speaks of the benefits of bathing at sangam during this period, elimination of negative influences and rejuvenation of mind and soul. Prayers for the ‘Kumbh’ are also expressed in Atharva Veda and Yajur Veda.

Historic evidence points towards the rule of King Harshvardhana (c.590-647 AD), as the time when Kumbh Mela got widespread recognition across geographies. Famous traveler Hsuan Tsang has prominently mentioned the grandeur of Kumbh Mela in his travelogue. The traveler’s account also summarizes King Harsh’s charities at the confluence of holy rivers where he gave gifts and donations to the scholars and sanyasis. King Harsh used to hold a great quinquennial assembly on the sands of the holy confluence at Prayag and would distribute all his possessions.

The Kumbh Mela at Prayag is widely considered as the most significant among all the Kumbh festivals held at other locations. It is considered as the source of light and knowledge. It is believed that Prajapati Bramha performed Ashvamedha Yajna at Dashashvamedha Ghat situated at the confluence of the Ganga and Yamuna and created the universe due to which it is the most famous and significant among all other Kumbh festivals.