Embark on Sri Lankan Heritage tour to visit the most sought-after cities of Sri Lanka. This Tour offers the best of architectural, cultural and scenic experiences. During this journey pay a visit to Mont Lavinia, Kandy, Nuawara Eliya, Galle, Beruwela

Visit the sacred Temple of the Tooth

Arrive Colombo Airport you are met by our guest relation executive with your name placard who would assist you to the Car and then transfer you to Mount Lavinia. Overnight Accommodation in Mount Lavinia

Today proceed to do Sightseeing tour of Colombo Bursting with life and colour, the islands largest city which was once the Capital of Sri Lanka, is now its Commercial hub. This modern city with an ancient heart is a monument to its colonial history. Its architecture is influenced by the Portuguese, Dutch and British. Today, it is a mix of modern architecture among colonial buildings. The remnants of Dutch and Portuguese domination, is seen primarily in the Fort, located north of the city. In stark contrast, are modern buildings such as The Twin Towers of the World Trade Center and five start hotels in the same location. Since the end of its civil war, the skyline is constantly changing with investment in to the Citys infrastructure. Pettah, where daily life overflows on to the streets, not too far from the Fort is a Traders hub and home to few unique examples of architecture in its churches and kovils. With its network of streets each specializing in one thing or another, where anything and everything, from garments to toys to electronics and sweet-meats could be found, it provides an interesting insight in to life as it is in a busy,tropical cosmopolitan city. For a more sobering and tranquil experience, visit the Sima Malaka Meditation Island (on the Beira Lake), designed by Geoffrey Bawa, Sri Lankas most famous architect. The island is landscaped with collections of Thai Buddha Statues, beautiful stone carvings, Buddhist paintings and a small museum. Colombo,s public transport is largely based on buses and a limited network of trains, either government owned or operated privately. The more adventurous mode of transport is the auto rickshaw, also known as the three-wheeler or tuk tuk operated by individuals.As Bella Woolf once said, It is the meeting place of the world. It palpitates with life and with the romance of those who wonder the earth. Overnight Accommodation in Mount Lavinia

Proceed to the Pinnawela Elephant Orphanage. Sri Lanka is one of the best places observe the Asian Elephants in close proximity. Do the activities Later proceed for Kandy. Upon arrival in Kandy check in at your pre booked Hotel Overnight Accommodation in Kandy.

Proceed to Dambana Ancient “Veddah” Tribal Village. Dambana Ancient “Veddah” Tribal Village: This tour will give you the opportunity to meet the surviving indigenous population of Sri Lanka the “Veddah” population, whose history spans close to 2000 years. -The true plight of “Veddah” will help you to look at them as group of human beings rather than an array of exhibits. They were the ancient custodians of the jungles and they were “at home” in the jungles. Since the department of Wild Life was established and the Fauna & Flora ordinance was empowered to protect the forests and the wild life of Sri Lanka the “Veddah” population was deprived of their natural habitats and livelihoods & their tools and weapons and they were forced out of the jungles. Jungles were declared National Parks and most of other prosperous land was taken over by the Mahaweli Development projects. Today, with the intension of further protecting the “Veddah” population they are restricted to Dambana and they were given alternative methods of survival, farming. Originally the young “Veddah” boys observed & learnt the art of catching a game from their fathers and girls took after their mothers in managing the home and rearing children. But today the children from “Veddah” population are sent to school to get more ‘civilized’ education -“Veddah” population was never used to being confined to “a village” as they were much used to the rustic abodes in the jungles. So what is normal & civilized for the rest of us is “abnormal” for the “Veddah”. Ironically, today the “Veddah” themselves and the various customs and tribal dances that they perform when visitors come to their “village” are not mere exhibition or a performing art, but the innate life style that they dearly miss. The silent appeal from the “Veddah” population is to be back in their natural forest habitats where they lived harmoniously with nature, protecting each other. Leave Dambana & proceed to Kandy on the recently renovated Mahiyangana Kandy Road which is famous for its winding misty roads with “18 bends”. Overnight Accommodation in Kandy

Proceed to the sacred Temple of the Tooth followed by a sightseeing tour of Kandy. Kandy was the last kingdom of Sri Lanka when British the British Colonial rule took over the country completely by the 1815.The Railway industry which was founded by the British brought more exposure to the Kandyan kingdom from the rest of the world. Instantly the remoteness vanished and became a hub for trading. Sacred Temple of Tooth: (Duration of the visit 1½ Hrs). The Sacred Temple of Tooth, which is considered as one the most revered Temples by the Buddhists as it houses the Sacred Tooth relic of Lord Buddha.The present temple is built during the 17th Century and located in the city center, overlooking the Kandy Lake. The Relic of the Tooth is kept in a two-story inner shrine fronted by two large elephant tusks. Although visitors are not permitted to enter this inner shrine you could offer flowers at the outer shrine area. The Thevava or auspicious offering to the Sacred Tooth relic takes place twice a day early morning and evening. During this time you could witness the beating of the traditional drums and large offering of flowers by devotees in honor of the Tooth Relic.The belief goes on to say that the sacredness of this Temple made it a survivor during the Colonial rule and even the British rulers ensured its protection as it was revered by the Buddhists. Trinity College Kandy. Founded in 1872, as an Anglican Missionary school based on the traditions of the best of the public schools in England, the missionaries took into its realm the best of the local indigenous culture. Today the Trinity College of Kandy standout as a school that produces “educated Gentlemen.-The Chapel at Trinity College is a complete masterpiece, from authentic Kandyan lacquered windows to carved marble slabs, and a beautifully carved wooden pulpit and doorways. Later Visit to the Royal Botanical Gardens in Peradeniya. Royal Botanical Gardens in Peradeniya:Originated in the 1371 BC by a Kandyan King Wickremabahu III as a Royal pleasure Garden, was formerly established as a Botanical Garden in 1843 during the British Colonial rule.The Garden came under the administration of the Department of Agriculture when it was established in 1912.Consists of aquatic plants, Arches collection, grass collection, medicinal garden & Orchid garden amongst many others.The Garden is usually at its full bloom and the stroll through the articulately maintained pathways will be a tantalizing experience. Overnight Accommodation in Kandy

Board the Train bound for Nanu Oya & enjoy a scenic rail road journey passing the picturesque hill country with its beds of lush green tea plantations. It is not an exaggeration to say that the best view of the Hill country can be seen “from the Rail” (Please note schedule train times are subject to change, There for any changes to the above mentioned schedule train time we will advise you earliest accordingly Upon arrival in Nanuoya Railway Station around 15:55 pm you are transferred to Hotel at Nuwara Eliya. Nuwara Eliya: -Once called, Little England, due to the predominant presence of by the British, is Nuwara Eliya, one of the most elevated towns in Sri Lanka. It is also home to some of the best tea plantations in the world & the country’s largest collection of vegetable cultivations -The city’s cold temperatures call for sweaters, log fires, and blankets in contrast to the usual tropical weather prevailing in the rest of the island. During the ‘season” in April it attracts visitors both local & foreign and the town turns in to a hub of activity with its local motor races ,flower exhibitions fashion shows and horse racing. One of the highlights in the city is Victoria Park was established in 1897, to commemorate the 60th Jubilee Coronation of Queen Victoria which is usually full of flowers & best place for picnics. Gregory Lake is popular built during the year 1874 by a British governor Gregory, popular tourist for boat rides. The Nuwara Eliya Golf Club still remains prestige and boasts as one of the oldest Golf Courses in the country. The sacred Seetha Amman Temple is a venerated as a holy place especially by the Hindus and the Temple premises has been built in line with Hindu architecture. Overnight Accommodation in Nuwara Eliya

Proceed for visit Half day “Tea Experience”. Back to the Tea Cup: First introduced to the country in 1867 by the British planter James Taylor, Ceylon Tea is divided into three groups: High or Upcountry, Mid country, and Low country tea, based on the geography of the land on which it is grown. Today the slogan “Pure Ceylon Tea – Packed in Sri Lanka” has become phenomenal worldwide. Today you will be able to become ‘up close & personal’ with handpicked Ceylon Tea. You will be escorted to an organic tea plantation dressed in local attire – saree for the ladies, sarong for the gentlemen & you will be provided with a basket in which to collect your tea leaves. Professional tea plucker will accompany you and show you which leaves to pluck. You’ll find that it takes a bit of practice to make sure the leaves end up in your basket. Then you will return to the Tea Factory, where the chief tea taster, will inspect your efforts. Thereafter you will be taken to the Tea Factory nearby and explained the whole process, from the initial drying (withering) of the leaves, through rolling, fermenting and sifting, to produce the different types of tea. The next day, a packet of your very own tea will be ready for you to take home. It would be a memorable “back to the tea cup experience” for you. Overnight Accommodation in Nuwara Eliya

Proceed to Galle. Upon arrival at Galle check in at your pre booked Hotel Overnight Accommodation in Galle.

Proceed on an exploration tour of the Galle Fort Galle Fort: Galle fort is 300-years-old fort, a UNESCO World Heritage Site, is the biggest highlight of this Southern port city of Galle. The Fort was built during the Dutch Colonial rule and today one of the best preserved edifices, which is a blend of Dutch ambiance and vibes of modernization. Overnight Accommodation in Galle

Proceed to Beruwela. Upon arrival in Beruwela check in at your pre booked Hotel Overnight Accommodation in Beruwela

Day at leisure on the Beach Overnight Accommodation in Beruwela

Day at leisure on the Beach Overnight Accommodation in Beruwela 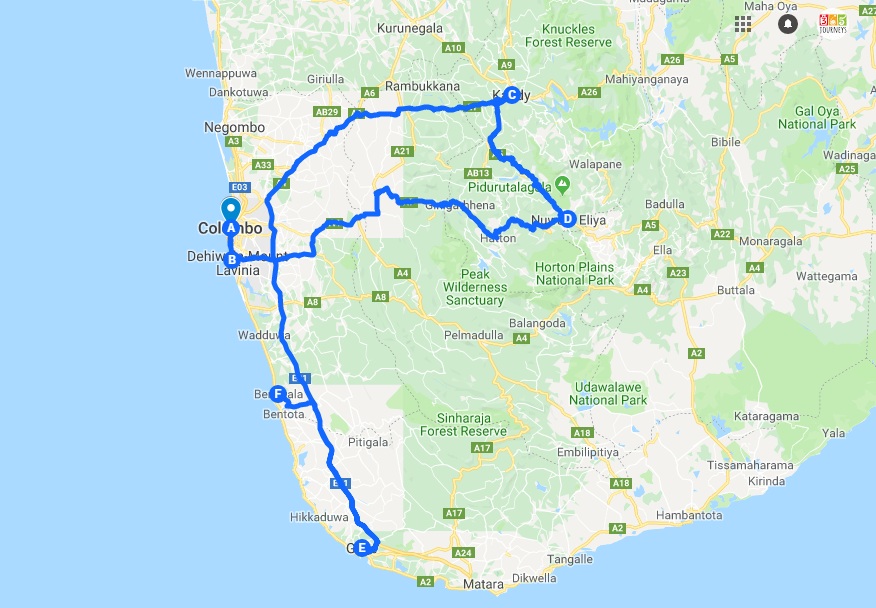