Embark on a journey to discover the Golden Triangle of India visiting the Capital city “Delhi”, The Mughal City “Agra” and The city of Palace and forts “Jaipur”, Also visit the Kingdom of Dragon “Bhutan”. Explore the beautiful Monasteries and natural beauty of Bhutan.

Visit to Tiger’s Nest in Paro

Arrival at Indira Gandhi International Airport Terminal 3 of Delhi and after you do your Immigration and other formalities you will be meet by our representative at the Airport arrival Hall. He will be carrying a Pla Card with your name written and after you meet him he will assist you to your Hotel
Optional Visit the Akshardham Temple.
Swaminarayan Akshardham in New Delhi epitomises 10,000 years of Indian culture in all its breathtaking grandeur, beauty, wisdom and bliss. It sits near the banks of the Yamuna in eastern New Delhi. For the first time ever in the world witness the heritage of India in all its facets, insights and beauty at the Swaminarayan Akshardham through its mandir, exhibitions, verdant gardens and other attractions
Overnight Accommodation in Delhi

Later proceed for a Full Day City tour of Delhi along with your Guide
During the city tour you will be covering Qutab Minar - which is the tallest brick minaret in the world, Humayun's Tomb, India Gate – a war memorial which was built to salute the brave Indian soldiers of the British Army who lost their lives in World War 1, Rastrapati Bhawan or the President’s House and the Parliament Street where you can see various government buildings, Raj Ghat the cremation place of the Father of the Nation Mahatma Gandhi, Red Fort, Jama Masjid and the Chandni Chowk
Overnight Accommodation in Delhi

Checkout from the Hotel and drive to Agra in your Private Air Conditioned Vehicle. Arrive Agra – The Mughal City and Check in to your Hotel.
Evening enjoy the sunset view of Taj Mahal from the Mehtab Bagh Overnight Accommodation in Agra

A Early Morning start to visit the Famous Taj Mahal at Sunrise. (Every Friday Taj Mahal is Closed). An immense mausoleum of white marble, built in Agra between 1631 and 1648 by order of the Mughal emperor Shah Jahan in memory of his favourite wife, the Taj Mahal is the jewel of art in India and one of the universally admired masterpieces of the world's heritage.
After viewing Taj Mahal return to hotel for breakfast
Have breakfast at the Hotel Coffee Shop
Later proceed along with your guide for city tour of Agra visiting Agra Fort - built near the gardens of the Taj Mahal stands the important 16th-century Mughal monument Agra Fort was also the headquarters for the Mughal Emperor Shah Jahan, Itmad-Ud-Daulah a beautiful tomb built of red sandstone in the memory of architect of the Taj Mahal.
In the Evening stroll around the markets along with your driver Overnight Accommodation in Agra

Checkout from the Hotel and drive to Fatehpursikri which is a world heritage site and was built by Akbar. It boasts of several palaces, Masjid’s and large halls which denote typical Mughal architecture. After visiting Fatehpursikri continue your journey toward Jaipur in your Private Air Conditioned Vehicle. Arrive Jaipur check in at your Hotel
In the Evening stroll around the markets along with your driver
Overnight Accommodation in Jaipur

Today explore the princely state of Jaipur along with your guide. The Day starts with a Jeep ride at Amber Fort. in the Aravali Hills, which is a super example of Rajput (medieval Hindu) style Architecture. Visit the Sheesh Mahal or the Hall of Victory glittering with mirrors in the Fort.
After the Amber fort visit tour of City Palace and Observatory. The City Palace in the heart of the old city is a blend of Rajasthan and Mughal architecture, the complex has a variety of courtyards, gardens and buildings The Palace of Winds – Also known as Hawa Mahal, a five-storied structure of pink sandstone has semi-octagonal and delicately honeycombed windows overlooking the main Street of the old city. It was originally built to enable the ladies of the Royal household to watch everyday life
In the evening a worth visit to the Colourful markets of Jaipur along with your driver
Overnight Accommodation in Jaipur

Checkout from the Hotel and drive to Delhi in your Private Air Conditioned Vehicle. Arrive Delhi and Check in to your Hotel
Overnight Accommodation in Delhi

Today you are transferred to Delhi Airport to board flight for Paro. Arrive Paro Airport you will be received by our representative followed by an interesting drive of about 1.1/2 hours duration to Thimphu, the modern capital town of Bhutan. In clear weather, Druk Air’s flight to Bhutan provides a wonderful view of Himalayan scenery. Whether flying along the Himalayan range from Kathmandu or over the foothills from Kolkatta, it is a fascinating journey, culminating in an exciting descent past forested hills into the kingdom. Afternoon visit Memorial Chorten. This stupa was built in 1974 in the memory of Bhutan‘s third King, His Late Majesty, King Jigme Dorji Wangchuk, who is popularly regarded as Father of modern Bhutan. The paintings and statues inside the monument provide a deep insight into Buddhist philosophy. Later drive to visit Trashichhoedzong. Also know as ‘fortress of the glorious religion’, it was initially built in 1641 and later rebuilt in its present form by King Jigme Dorji Wangchuk in 1965. The Dzong houses, main secretariat building which houses the throne room of His Majesty, the King of Bhutan. The National Assembly Hall is housed in a modern building on the other side of the river from the Dzong. During the warmer summer months, the monk body headed by His Holiness, the Je Khenpo, makes its home in the Dzong.
Overnight Accommodation in Thimphu

The capital town of Bhutan and the centre of government, religion and commerce, Thimphu is a unique city with unusual mixture of modern development alongside ancient traditions. Although not what one expects from a capital city, Thimphu is still a fitting and lively place. Home to civil servants, expatriates and monk body, Thimphu maintains a strong national character in its architectural style. After breakfast, sightseeing in Thimphu valley including visit to the following: the National Library, housing an extensive collection of priceless Buddhist manuscripts; the Institute for Zorig Chusum (commonly known as the Painting School) where students undergo a 6-year training course in Bhutan’s 13 traditional arts and crafts. Later visit Textile and Folk Heritage Museum, a fascinating testimony of the Bhutanese material culture and living traditions. Afternoon visit Changangkha Lhakhang. It is a fortress like temple and monastic school perched on a ridge above Thimphu, south of Motithang. The temple was established in 12th century on a site chosen by Lama Phajo Drugom Shigpo, who came from Tibet. The central statue here is Chenrezig in a manifestation with 11 heads. From temple courtyard, there is fascinating view of Thimphu valley. Then drive to Takin Preserve. The Takin is the national animal of Bhutan, and looks like a cross between a cow and a goat. Legend has it that the animal was created by the great Buddhist yogi, Drupa Kunley, and it can be found only in Bhutan and nearby areas. Then visit Jungshi Handmade Paper factory which produces traditional handmade paper from natural plants mainly from ‘Daphne’ plant species which is insect-resistant.
Overnight Accommodation in Thimphu

Drive to Dochula pass (3,080m). If the weather permits, you can see a range of high Himalayan peaks towards the north east. Following peaks can be seen from this pass, on a clear day ; Masagang (7,158m), Tsendagang (6,960m), Terigang (7,060m ), Jejegangphugang (7,158 m ), Kangphugang (7,170 m ), Zongphugang (7, 060 m ), a table mountain that domiates the isolated region of Lunana - finally Gangkar punsum, the highest peak in Bhutan at 7,497m. En route visit Simtokha Dzong, the oldest fortress of the country built in 1627 which now houses the School for Buddhist studies. Further drive onwards arriving Wangdue Phodrang town for lunch. The descent from Dochula into Wangdiphodrang valley is quite long as the altitude difference is 1,700 meters. Visit Wangduephodrang Dzong. Sitting on top of the hill at the confluence of Punakha Chhu and Tang Chhu rivers, Wangduephodrang Dzong is town’s most visible features. Proceed further to Trongsa across Pelela pass (3,300 m ), the traditional boundary between east and west. The pass is marked by a large prayer flag and the ground is covered with high altitude dwarf bamboo. Stop en route at Chendbji Chorten, which was built in 18th century by a Lama named Shida, it is Nepalese in style with eyes painted at four cardinal points. Arrive Trongsa and check into the hotel.
Overnight Accommodation in Trongsa

Visit Trongsa Dzong. Like almost all towns in the Kingdom, this Dzong architecture dominates the entire Trongsa horizon dwarfing the surrounding buildings. Built in 1648, it was the seat of power over central and eastern Bhutan. Both the first and second King ruled the country from this ancient seat. Then visit Ta Dzong, a cylindrical stone structure rising five storeys, was built in 1652 by Chogyal Minjur Tempa, a task entrusted to him by Zhabdrung Ngawang Namgyal. After more than 350 years, it has been resurrected into a classy museum that represents a tasteful blend of tradition and modernity. After lunch drive to Punakha. Upon arrival in Punakha check in at your pre booked Hotel
Overnight Accommodation in Punakha

Visit to Punakha Dzong, a massive structure built at the junction of two rivers. It was the capital of Bhutan until 1955, and still serves as the winter residence of the monk body. The first King, Ugyen Wangchuck was crowned here in 1907. The fortress has withstood several damages from fire, earthquake and flood. The latest flood of Oct’ 1994 caused great damages to the fortress but miraculously spared the statue of Buddha Jojampa. Afternoon in Paro ,visit Ta Dzong, once a watchtower, built to defend Rinpung Dzong during inter-valley wars of the 17th century, Ta Dzong was inaugurated as Bhutan’s National Museum in 1968. Afterwards, walk down a hillside trail to visit Rinpung Dzong. Built in 1646 by Shabdrung Ngawang Namgyal , the first spiritual and temporal ruler of Bhutan, the Dzong houses the monastic body of Paro, the office of the Dzongda (district administrative head) and Thrimpon (judge) of Paro district.
Overnight Accommodation in Paro

Drive up the valley to view the ruins of Drukgyel Dzong. It was from here that the Bhutanese repelled several invading Tibetan armies during the 17th century. Nearby visit traditional Bhutanese Farm House which offers good insight into lifestyle of local people. Then take an excursion to Taktsang Monastery, the most famous of Bhutanese monasteries. It is said that Guru Rinpoche arrived here on the back of a tigress and meditated at this monastery hence it is called “Tiger’s Nest”. The excursion to monastery takes about 5 hours for round trip. While return to Paro town visit en route Kyichu Lhakhang, one of the oldest and most sacred shrines of the Kingdom.
Overnight Accommodation in Paro

Today you are transferred to Paro Airport to board flight for Delhi. Upon arrival in Delhi Airport you are met and transferred to your pre booked Hotel
Overnight Accommodation in Delhi

Today you are transferred to Delhi International Airport to board Flight back Home. 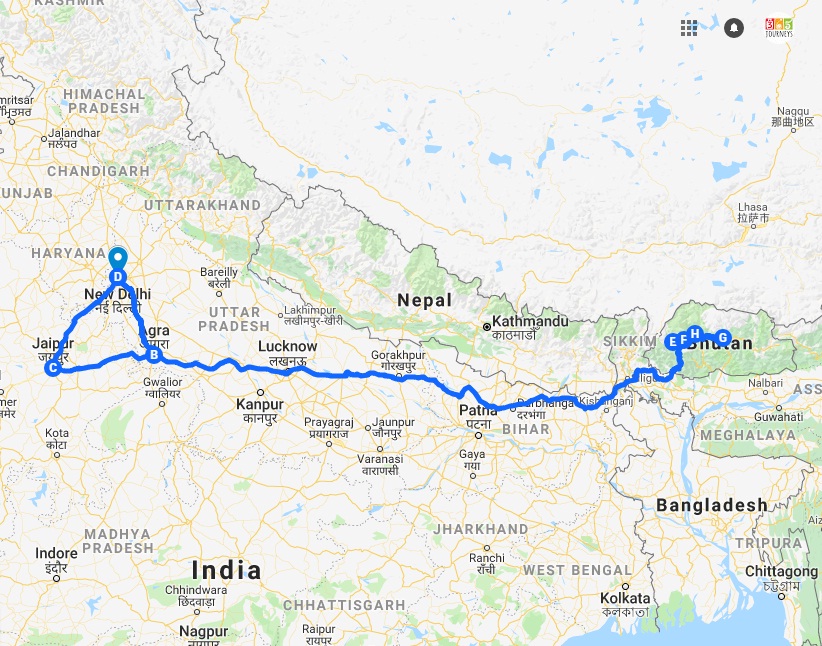